SnoCast: Ski Season Summary and Where Snow is Still Falling 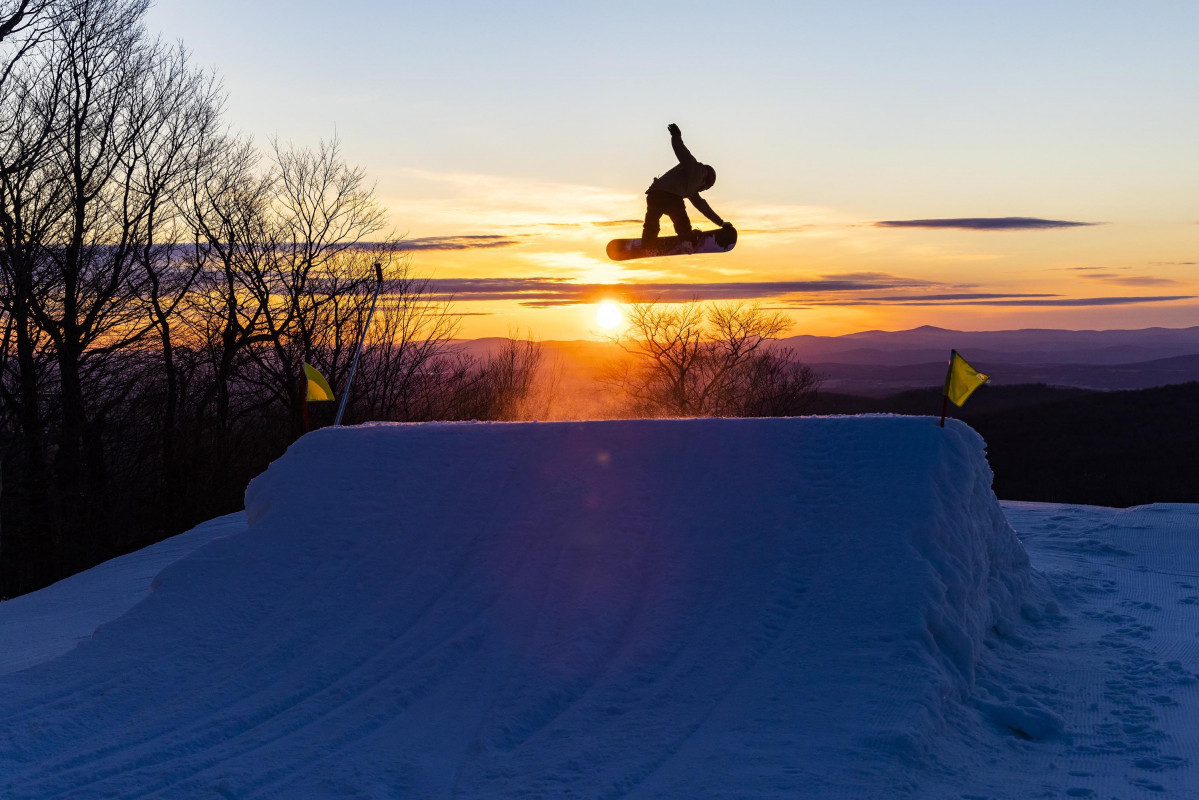 Jay Peak relishes the dawn of a new day, announcing an extended ski season into early May, as long as weather holds (Jay Peak_Twitter)

The 2021-22 ski season is winding down. In our final SnoCast of the season, we’re checking out the season sum-up, and where the snow is still falling for the remaining ski areas still turning chairs.

A heavy spring snow event blew through the West this week, delivering heavy snow for many. From the Cascades to the central Rockies, some places picked up anywhere from 1 to 3 feet of spring snow. Excellent news for the ski areas still turning chairs.

In the forecast, a new and potent storm plows into northern California late Friday to Saturday, delivering more healthy spring snow to the Sierras to the interior Northwest. Many peaks in the northwest will receive a fresh 5-10”, while the Sierras and highest peaks may get a fresh 1-2 feet of snow through the Easter holiday.

A slightly warmer system with higher snow levels moves in again by Tuesday of next week, taking a similar course across the Northwest US with more snow ahead. Check our snow reports page for the Northwest, Southwest, and Rockies to see who is still open. 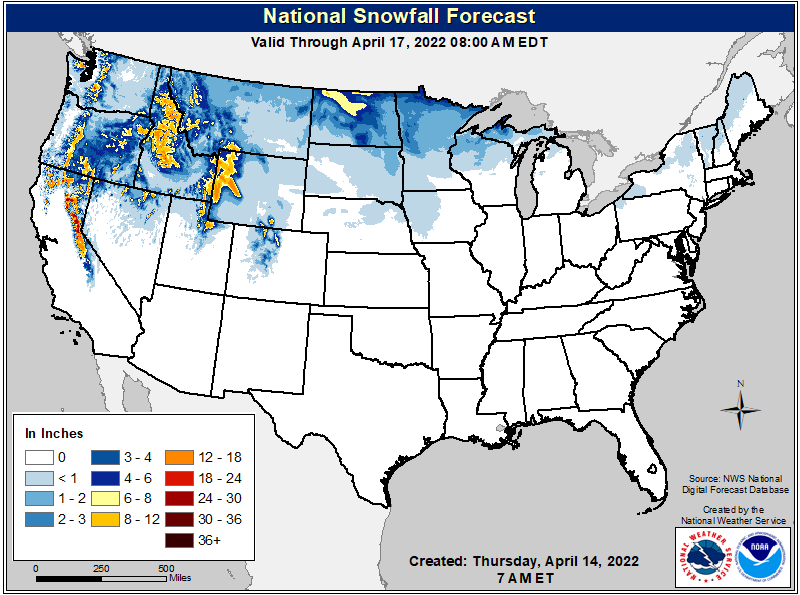 This week, a powerful blizzard blasted the north central US, dropping feet upon feet of snow. Unfortunately, there aren’t many ski areas underneath that dump. However, as that storm lifts up into central Canada through Thursday, colder air will be ushered in on the backside, bringing chilly mid-April temps to the Midwest Thursday and to the Northeast by Friday. A second push of colder air funnels in by the weekend, kicking up a brief burst of snow for upstate New York and New England Friday night, with a quick dusting-2” possible for the high elevations by Saturday morning.

It will remain unseasonably chilly for much of the Upper Midwest and Northeast through the weekend and early next week. Another chance for snow develops in the Northeast by Tuesday.

Ski season has ended for the Southeast, but check out our Midwest and northeast snow reports pages to see who's still open.

It's been a case of the haves and have nots this winter. According to analysis from NOAA’s Climate Prediction Center, the influence of a La Nina pattern likely led to a split winter season, which is summarized as the 3 month period December, January, and February. A cooler and wetter winter unfolded across the northern tier of the U.S., resulting in good winter snow for the Pacific Northwest, high peaks of the interior West, and the northern Great Lakes.  However, the lingering longer-term effects of drought, and on overall warmer than average long term trend, still led to overall lower than average season tallies from start to end of many ski area seasons (October-April). 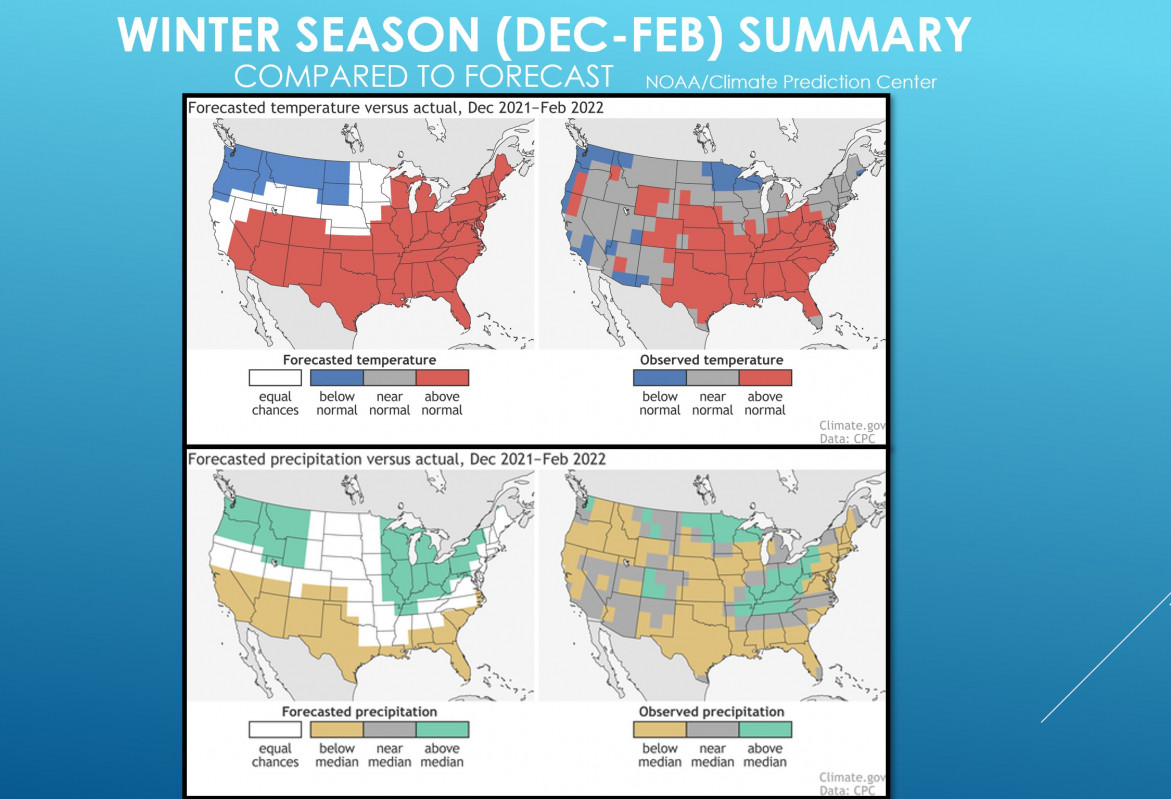 The Pacific Northwest wins for snow totals this winter season, with above average precipitation and colder than average temperatures during December-February --a fingerprint of La Nina for sure. While still an unofficial tally, I find many ski areas across the Northwest had some of the highest totals in country, with a few peaking over 400” for the entire ski season, including Timberline, Mount Hood, Mt. Baker, and Revelstoke. Despite the impressive sounding totals, the 460"+ at Timberline in Oregon still fell shy of their typical annual 550"+ for an entire ski season. This was the case for many across the West, falling overall shy of a "typical" full season total due to longer term ongoing drought.

Across the Southwest, it came and went in waves, with the overall trend of cooler than average temperatures and dry conditions due to ongoing drought. California started strong, but finished dry (Jan/Feb) as a driving weather pattern in the Pacific flipped. New Mexico and Arizona saw strong late season snow, with multiple feet in March for some, including at Ski Santa Fe, finishing with about 155" on the season, about half of an average ski season total.

The winter season was also split for the East, featuring a snowy and cold pattern in the Midwest, generally mild and drier in the Northeast, and a mild, wetter winter season (Dec-Feb) for the Southeast.

In the Midwest, temperatures ran cooler than average, overall around 1-3 degrees below norm for the entire ski season. However, with warmer than average Great Lakes water temperatures, and cold blasts of air during the main winter months (Dec-Feb), it was a very snowy season for parts of the Upper Midwest thanks to enhancement from lake effect snow. Mount Bohemia in the UP of Michigan hit an epic milestone, topping 300” for the season.

Meanwhile, the Northeast featured slightly warmer than average temperatures overall, with the mean high and low temperatures running about 1-2 degrees above average. This also led to lower-than-normal snowfall for the northeast. There were exceptions, however, with pockets of above average snow in the highest peaks of the Adirondacks, Green, and White Mountains, mainly at point mountains. Killington topped just over 200" for the season, while Jay Peak approaches 300" thanks to frequent enough shots of cold and brisk northwest winds favoring upslope snow. This localized effect may allow may to stay open into May.

See ya next season, skiers and riders! - Meteorologist Kerrin Jeromin